Review of The Heart's Narrative by David Epston 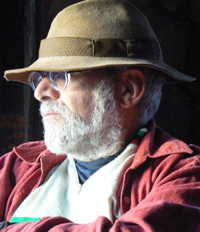 David Epston
"The Heart's Narrative: Therapy and Navigating Life's Contradictions" is a book so vast in its scope, so challenging and instigating of the reader's own reflections and finally creating within the very text itself what Johnella refers to as 'a climate of discovery'. What kind or genre of text is it, you might ask? Because it takes as one of its central concerns the very politics and ethics of representation, Johnella had to find for herself a unique form of textual expression to both challenge and at times, defy the very things texts 'do' - represent 'knowing' as the 'known'. I take Johnella's concern for what she refers to as "emergent knowledge" as shaping of this very text. In so many ways, The Heart's Narrative is so unsettling but it adamantly refuses to settle matters; if anything, it seems to aspire to take her and those in conversation with her and us as readers to 'places', where none of us may have ever travelled before. Such terra incognita is neither for the faint hearted, nor for those who take up the traders of counsellor, therapist, psychologist, etc., seeking to invest themselves with professional authority that legitimate them as 'experts' on the lives of others. For Johnella is advocating a "talk that sings" rather than those 'talks' that mandate interpretation based on a conviction that anyone can really 'know' beyond doubt the talk of those who seek our assistance. Singing in one way she proposes - "When I sing, I am at times surprised by an upsurge of emotion. Occasionally I can identify a lyric or melody or response to the day's events. At other times it appears that the activity of singing allows me to touch emotions that have been previously censored or dismissed. Singing can move us past the time honoured and invisible mind constraints that can shape the way we engage with our selves and our environment" (pg.30).

She goes on to propose what she refers to as "a relational externalising process": In a similar way, conversation that uses a relational externalising process can become talk that sings. This style of talking provides people (clients) with the experience of engaging actively with identified concerns and abilities, relationships, ideas, practices and time. Engaging with is experientially different from being acted upon by another (the knowledgeable professional) or being submerged in problems that take on the form of an additional limb or organ just as though that problem existed within the person (pg.31). Johnella's chapter, "Just Talk", so modestly titled, is the most profound - at times unnerving and at other times thrilling - meditation on the work we do that I have ever read. By the same token, her chapter - "The Therapeutic Relationship" - goes so much further than Johnella lets on. From my perspective, it is the most actively critical consideration of the 'transference/counter-transference' version of therapeutic relationships, once again, that I know of. I know I have read my fair share of passive critiques of such a historical version, which can be so taken for granted as to seem incontestable. But consider the times and circumstances of Freud and his hopes for a professorship. Is it any surprise that he should have constructed a version of the therapeutic relationship which arrogated to one part the standing of a late 19th century, central European patriarch and to the other that of a child who, although they were incited to speak, were told what they said meant. I have always abhorred such presumption as I suspect Johnella has too. But here, her critique seeks some redress in the form of a counter-practice. I suspect it is one that so many narrative and systemic family therapy colleagues who turned their backs on the very idea of 'therapeutic relationship' will comfortably embrace. Johnella's ten year long history (1988-1998) of working with people's experience of abuse - emotional, sexual and physical obviously provided the grounds for such considerations as the very demands of such work forbade her from ignoring that she and the other were in an extraordinarily significant relationship. Yet, her version is so at odds with the conventional. Here, negotiations around such a relationship allow for both parties to speak to its very terms and renegotiate them to meet any exigencies. No longer can discussions occur behind the backs of people (clients) and then be dictated to them.

Johnella has a reputation in New Zealand for the proven mastery of her craft and providing the most intellectually challenging supervision, consultation and training. On those occasions of conference addresses and plenaries, she has embodied all of the above. So often, such address were followed by thunderous ovations and long, meditative silences. I have known few who could move me more by her spoken words that Johnella. In a culture of print (and now electronic) text, so few of us have the memories oral discourse requires. Too often, those who were "taken by what she said" (private correspondence) were unable to consider fully what she was saying. Why? Johnella has always implicated her own lines of enquiry into what she had to say and consequently, they often remain open, unfinalized and impossible to summarize. She has always drawn upon her own "re-searched" work. Johnella uses that term to distinguish her practice from those conventions surrounding "scientific research'. That has always been the very crucible of her genius. It is such a resource to now have a text to study and review.

In so many ways, she (and The Heart's Narrative) is a rara avis, an independent scholar with no institutional associations, no particular fidelity to theories that cannot past her ruthless test of application and accountability to those we purportedly serve and the very courage of her convictions. How many are there who would dare to bracket professional knowledges so she could go it alone? Anyone who knows Johnella would not be surprised by what many would consider audacity. From the first conversation I had with Johnella, she spoke to the politics of this work, much the same I realize now as she always has in those family discussions she acknowledges.

"I mention my childhood because the resources and values that have enabled my pursuit of therapeutic ideas and practices developed within my extended family living in a unique environment (Greymouth): a place of laughter, much appreciation of language, conversations on justice and compassion, demonstrations of the importance of love and connection, and a steady relationship with the possibility of injury and death" (in the coal mines of the 'coast') (viii). Throughout her career, Johnella has never remained silent but acts on her convictions. In the 1980s working in the public psychiatric services and then for Presbyterian Support Services, finally as Director of The Leslie Centre, she suffered greatly for this, although due legal process and nemesis always vindicated her. It did not surprise me that she went about preparing and publishing this book in ways that ensured she could not be compromised. She took her own counsel and in doing so became author, designer, publisher and now marketing manager of Edge Press. The only advice I ever gave her was to ensure she spared no expense on the cover. Why?

Knowing Johnella as I have over the years as colleague, partner in The Family Therapy Centre (1998 to the present) and as a good friend, I surmised that her book would be very demanding of its readership. These are the self-same demands she puts on her self. At long last when I got my copy a week or two before the official launch, I found myself doing something I rarely do - continually setting The Heart's Narrative down while I went over in my mind what I had just read. For this is a book that cannot be read easily or even grasped in one reading. I knew that Johnella would never produce a manual or 'ten steps to ...' book. I felt sure that would offend against her commitment to and passion for her life's work and what she refers to as her 'engagement with ethics'. It was no surprise when I learned recently that discussion groups were forming in Auckland to go through the book in company. Even though this book is what honorary doctorates are awarded for, Johnella's passion and commitment are infused into everything about this book. In some ways, I doubt if there ever has been a more personal book that this.

A review such as this seems inadequate to the magnitude of The Heart's Narrative and cannot but do it an injustice. How would you like to write a review of Tolstoy's War and Peace? The Heart's Narrative will be read over and over again for years to come and I predict it will achieve 'classic' status in time. I can only hope that Johnella can take some relief after the two years she took off to prepare and publish this book. I know this cost her dearly. I and all her friends who might otherwise have thought she had fallen off the planet welcome her back and wish her book every success it deserves.
Buy "The Hearts Narrative"